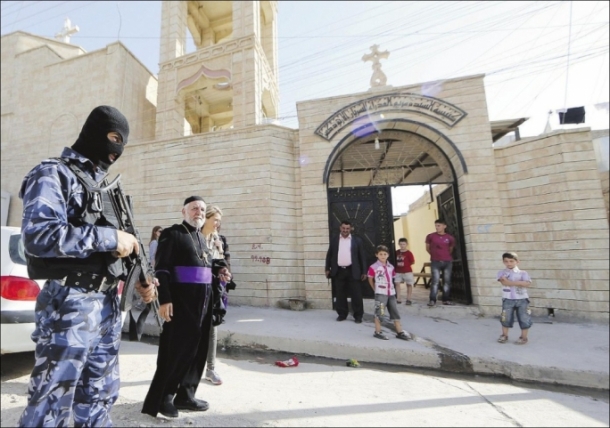 Persecution often comes across as numbers (1000 here, 200 there) and far-away place names. But persecution has a face.

Last Sunday I saw a man, stubbly and olive-skinned, nursing his styrofoam cup of coffee at the back of an old church building in London. His immediate family are in the UK but many of his friends and relatives are still in Iraq. They are Christians and he was quick to tell me that they had just been kicked out of their homes in Mosul. Given an ultimatum by the extremist militias, driven out with only the clothes they were wearing.

This is the report in the UK Daily Telegraph:

Christian families streamed out of the northern Iraqi city of Mosul on Saturday after Islamist fighters said they would be killed if they did not pay a protection tax or convert to Islam.

“For the first time in the history of Iraq, Mosul is now empty of Christians,” Patriarch Louis Sako lamented as hundreds of families fled ahead of a noon deadline set by Islamic State for them to submit or leave.

The warning was read out in Mosul’s mosques on Friday afternoon, and broadcast throughout the city on loudspeakers.

“We offer [Christians] three choices: Islam; the dhimma contract – involving payment… if they refuse this they will have nothing but the sword,” the announcement read.

It said Islamic State leader Abu Bakr al-Baghdadi, who the group has now named Caliph Ibrahim, had ordered Christians who did not want to stay and live under those terms to “leave the borders of the Islamic Caliphate”.

A twist to this situation is that Mosul is sited just next to the ruins of the ancient city of Ninevah. Various media sources (and a Youtube video) claim that ISIS destroyed the tomb of Jonah a few days ago. Leaving aside various questions and uncertainties (e.g. a) which if any of the various sites across the Middle East that are claimed as containing Jonah’s bones really do? b) given that the tomb of Jonah was actually in a mosque that had previously been a Nestorian church, is this tomb destruction really anti-Christian or simply an intra-Islamic sectarian issue? c) notwithstanding the thuggery and oppression of ISIS, might the iconoclast among us who worry about the revering of relics have a little sympathy with the sledgehammering in this case (cf. Matt. 23:29-31)?) it is interesting that the name of Jonah rises again in this context.

The story of the first Jonah testifies to God’s passion for the Gentiles and His unilateral determination to achieve their salvation despite the hugeness, the seeming impossibility of the task, despite the cruelty, idolatry and depravity of the nations, despite the hard-heartedness and half-heartedness of God’s own people. Salvation belongs to the LORD.

And the story of the Greater Jonah testifies to the willing self-sacrifice and resurrection power of the LORD, as He comes in person, preaches repentance and mercy and then throws himself into the sea of wrath and rises victorious on the third day to win an inheritance of nations; believers from every tongue who will be cruelly trampled in this life but are citizens of a perfectly secure Jerusalem.

We’re going through Jonah at First Priority prayer meetings at All Saints Cathedral, Naiobi first Sunday of the month. Praying for world mission. Come and join us if you can.