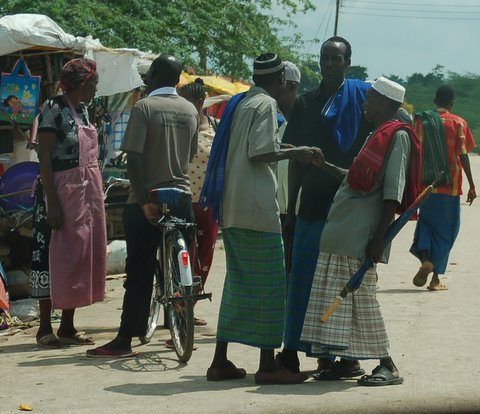 The Orma are a semi-nomadic people who live in the south eastern part of Kenya: Tana river and Lamu districts. They are a remnant of the once powerful Gala nation in Ethiopia. They mostly occupy Garsen, Tarasaa and Witu areas where they are mainly herders of cattle with small pockets of subsistence farming. The Orma are 95-99% Muslim but also believe in spirits, witchcraft and a male sky god who lives either on mountains, trees or hills. Christianity is often resented. Their population stands at 69000 with around 12 Christians known among them – 4 of whom at least are happy to be public about their new faith.

During the nineteenth century, war broke out between the Orma and their neighbours where they were then living in Ethiopia, northern Kenya and the upper part of river Tana. This forced them to migrate south to the lower part of the river and this history has always made them hostile to any visitors.

The Orma are devout Muslim believers and observe all religious ceremonies and rites within Islam. This is though mainly out of a culture of fear that was inculcated into them by Arab slave traders and masters who insisted that unless one was a true Muslim he was to be taken as a slave and sold to slave masters. Most of the current Orma people are Muslims by default and birth and though they might of necessity assent to what Islam stands for they are bound by family ties and bonds and the fear of being disowned.

The Orma on the Joshua Project